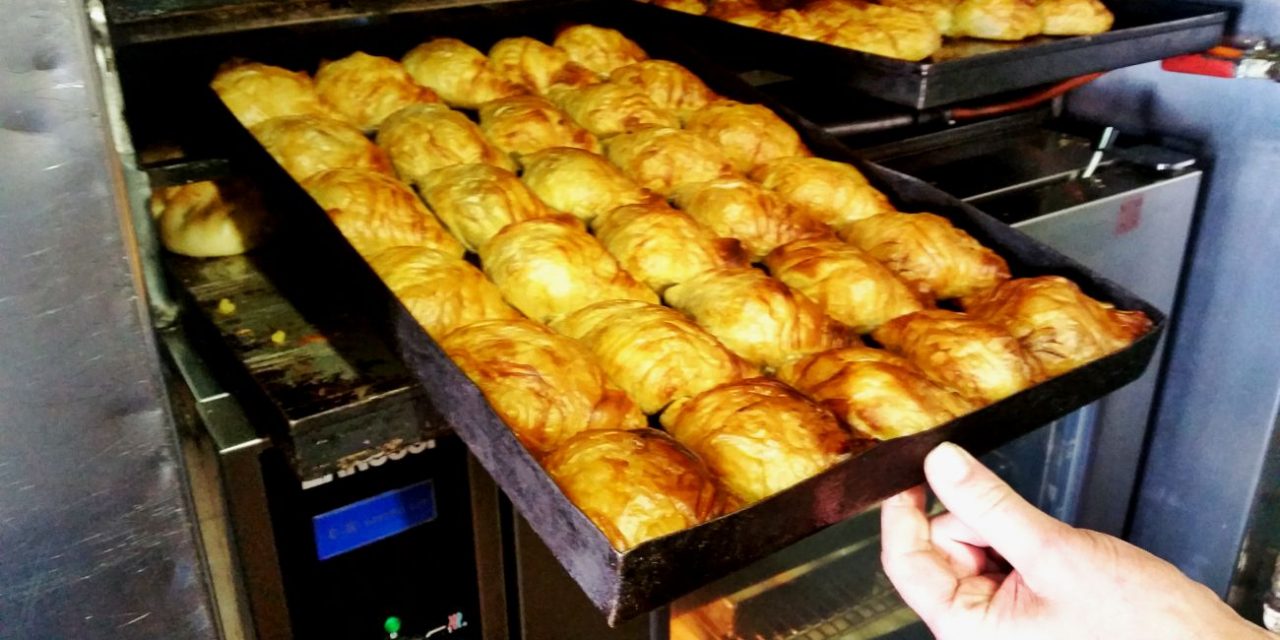 Hi Explorers, have you ever wondered where to get the best pastizzi on the Island?

Well it’s a sunny Friday afternoon in March and Flora the Explorer is in Rabat, to discover more about Malta’s iconic food, the Pastizzi 😉 Although they are regarded as Maltese National treasure and can be found in most shops on the Island, not everyone is aware of their existence.

Before coming to Malta Nick had never even heard of them, assuring me most English would more likely guess it to be a type of hat rather than Malta’s most famous food! Following some internet research for the best pastizzi on the Island, there was one name that dominated the reviews, Is-Serkin (The Crystal Palace) in Rabat.

Luckily, after contacting the owner Kenneth, he invited us down to gain an insight into his culinary secret. 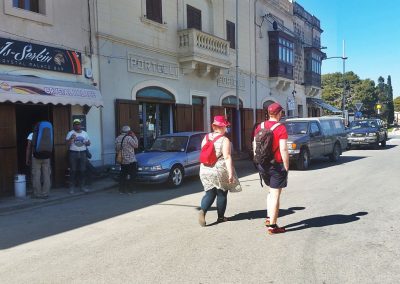 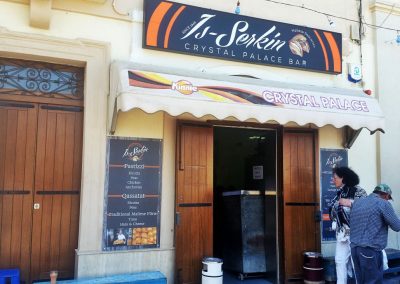 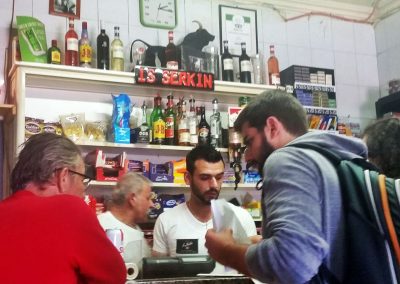 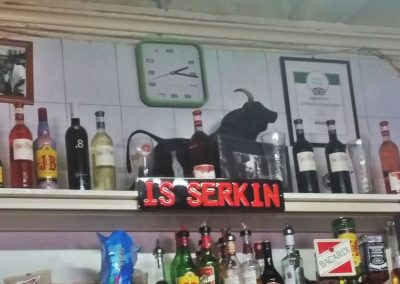 We arrived just after midday and it was clear that the reviews had been a reliable pointer, as Is–Serkin was already very busy with tourists and locals packing the shop to enjoy their favourite lunch. Kenneth and his team were understandably very busy but soon welcomed us with a smile and invited us outside to talk about his shop’s history.

Kenneth explained that having originally been one of Is Serkin’s many customers, he bought the business eight months ago from the previous owner Martin (pictured below), who had been there for 47 years! It was clear that he had great admiration for Martin, explaining that in the whole of that time he had never taken a day off and even opened the shop on his wedding day…a brave man according to Nick!

With such daunting shoes to fill, it would be understandable to be concerned about maintaining the high standards that Martin had set. However, Kenneth was clear yet very respectful of the challenge, explaining that both business levels and more importantly customer feedback had remained very positive. Having kept the existing core team of four people that had worked with Martin, it was clear that they provide a service that goes way beyond the standard of ‘being in it for the money’. Kenneth explained that he starts work at 2am and finishes on a good day at around 10pm, with a few hours rest in the middle of the day if he is lucky.

So what is their secret for being so succesfull?

“Our pastizzi are homemade with fresh ingredients, according to tradition“, Kenneth explained. “Pastizzi is a street food originating from the farmers and their products, so they could have something to break their hard work in the fields. Till today eating pastizzi is affordable to everyone, tourists are always surprised when they pay only 30 cents per pastizzo!“.

Open 24 hours on Fridays, Saturdays and Sundays he also explained how he gets to see the full cycle of his pastizzi through many different people’s lives. From the fisherman, hunters and vegetables dealers at the start of the day before anyone wakes up, through to tourists and locals.

“Then later in the afternoon the farmers and workers visit after their work, to socialize with a beer as Joe prepares a Maltese platter with some bigilla (mashy beans), a pepper cheeselet and a ftira”, typical Maltese bread usually filled with local tomatos, capers and tuna.

And eventually young clubbers, at the end of a wobbly night in their quest to find some much needed food.

Pastizzi is a favourite to everyone, regardless of the time of the day (and night)! 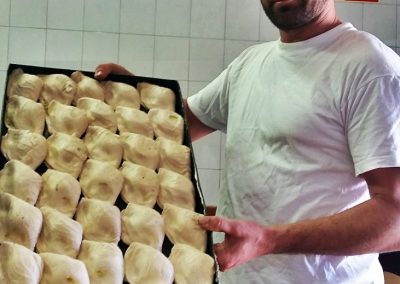 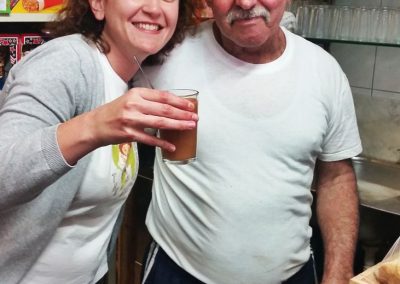 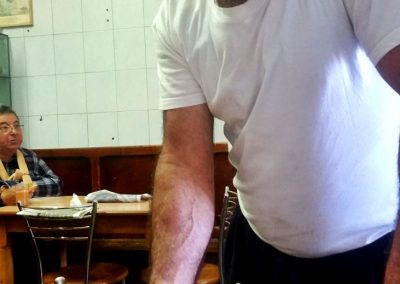 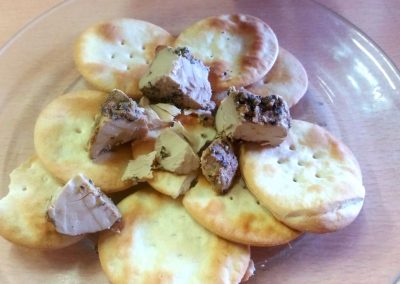 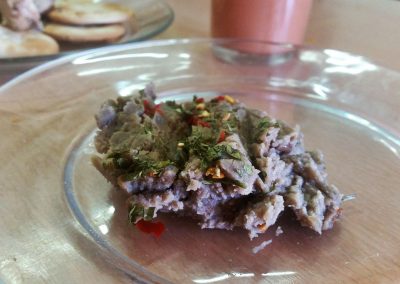 What Kenneth didn’t mention, probably because he is not the type of person to boast, is that he also gets the famous visit too!

Recently Prime Minister, Joseph Muscat, brought visiting Prime Ministers on a much publicised trip, for their first pastizzi experience. Even as we were chatting with Kenneth, Salvu Mallia (and Lautrec, his dog) arrived! I used to watch his show on TV when I first arrived in Malta, even if I couldn’t understand any Maltese and Salvu needed to know this. He was a very unassuming and friendly man, who was happy to chat about life, his work and let me stroke his dogI As people continued to arrive, so did Martin and we were unexpectedly introduced to Maltese Pastizzi Royalty! He greeted us with a lovely soft Maltese smile and started to tell us his story, even though he was clearly busy with photographer for another article.

He told us many stories about the history of Is-Serkin, including many offers over the years to travel and share his pastizzi secrets around the world. However he always preferred to stay loyal to his customers, maybe an unusual decision in a world seemingly dominated by money but honourable decision, which appears to typify him and the traditions that his successful business was built.

We were curious to know about the name ‘Is-Serkin’ and he told us a story dating back to his Father, who was very proud of the tea that he made. Apparently, it started with a friendly rivalry with another expert tea maker from the South, whose nickname translated to ‘The Horse’. In a way to show his father made the better tea, the people of Rabat gave him the nickname ‘Is Serkin’ roughly translated in English as ‘The Jockey’!

Martin also amazed us by explaining how on an average day at Is Serkin, he would serve around 500 glasses of tea in a day!

Although we were obviously impressed with his stories of success, we never felt that Martin was boasting or trying to impress, just a very humble man who was very proud of the service that he had provided to the local community and its many visitors. It was lovely chatting to Martin and it was clear that he was keen for Kenneth to succeed in following his foot steps and continuing the reputation. It was so nice to see and clear that both Martin and Kenneth are very close.

Eventually we got to the all important part of the afternoon, the tasting! In truth it’s always a potential banana skin when visiting restaurants as a guest, as it’s hard to be rude if the food isn’t as good as expected. At Is Serkin it really was not an issue, as the food was amazing and clearly deserving of their reputation across the Island!

Kenneth produced a huge selection of pastizzi, ftiras and Maltese speciality nibbles for us to try but not before the lovely Joe had shown me had to make their famous tea. Now both Nick and I can get through quite an amount of food (especially Nick) and on this occasion it was very much a tale of the hare and the tortoise! Nick sneakily started eating whilst I was still chatting with Kenneth, however he flagged very quickly and Flora The Explorer won the day, even managing to lick the plate at the end!

As we sat and munched our way through, chicken, artichoke, cheese and various other forms of pastizzi delights, it felt like we were seating eating with family such was the ambiance. Groups of Maltese men discussed life whilst drinking tea served in a glass, whilst tourists experienced their first ever pastizzi after a morning walking around Mdina.

Although there were many different languages being spoken, in a way it felt that we were all very much together, a real family experience! 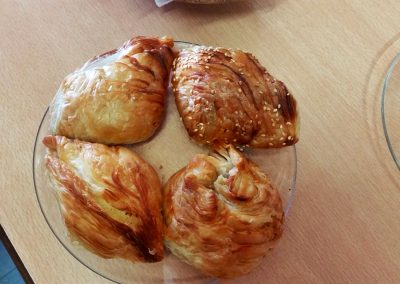 It would be wrong to say that we had been treated like VIPs (even if we couldn’t have wished for more) because it’s clear that Is-Serkin treats everyone like a VIP, which is probably one of the many secrets to their success!

A huge thanks to Kenneth and his team for the fantastic hospitality and amazing food, Martin for taking the time to share his story when he was clearly very busy, Joe for continually bringing us homemade bigilla every time we finished ours and everyone who was there for such a memorable afternoon 😉

Thanks for reading and Upcoming Events for this Weekend in Malta, 20-23 July Upcoming Events for this Weekend in Malta, 14-16th July